We were delighted to be able to work with all our friends again to stage a fair on the Green on 18th September 2021.    Thanks to everyone who helped to make it happen.   Read the minutes of the Washup meeting here.

Please click here to read our November Newsletter which includes plans for 2022.

Who do you think they are?
A Virtual Quiz for 2021

During the Covid-19 lockdown it became difficult to know when outdoor events would take place again and what form they might take.  We needed a virtual event.  Everyone was spending lots of time indoors on their computers and we hit on an idea that might encourage folk to look at the Westerham Heritage site, www.westerhamheritage.org.uk

This was a Westerham Society project, funded  by the National Lottery.  What if we were to make posters of a dozen faces from the recent (and not so recent) past, set them up on A-boards around town and write a quiz with a clue or two of  how to find the answer?  Here, for example, was the inimitable Westerham countryman, the late Donald Downs.  If you never did get to do the quiz, you can still see all the pictures here.

It was unfortunate that during Covid lockdown, St Mary’s Church was unable to stage their famous annual tree festival.   The Town Partnership had the idea of approaching local businesses to display trees in their windows and we’d like to thank them for their support. 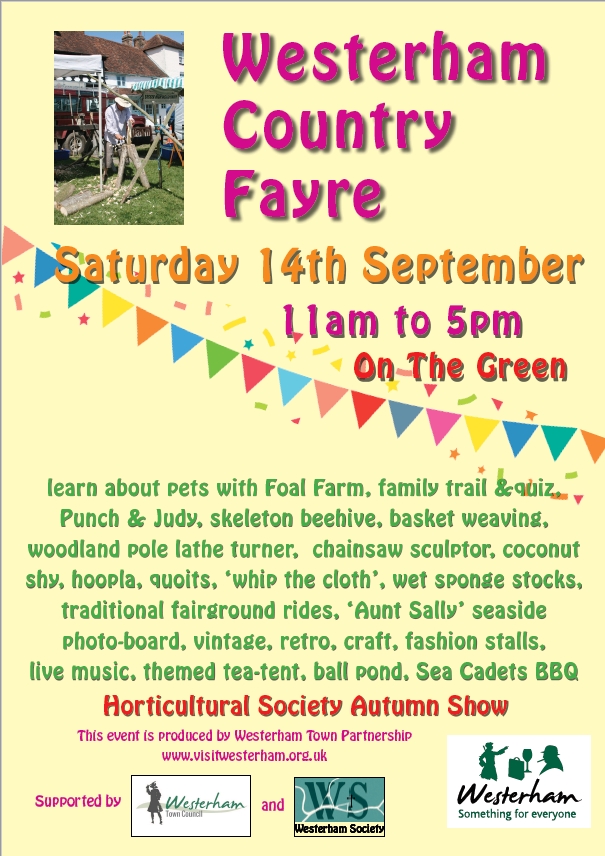 There had  been a long term idea to organise a Country Fair which could take place in September to coincide with the Westerham Horticultural Society’s annual exhibition.    After some discussion with their chairman Matt Strange  and Rev Kevin Barnard at St Mary’s Church it was agreed to hold the horticultural exhibition in the south aisle of the church while the rest of  the “fayre” took over the Green. We were delighted to enlist a variety of wonderful stallholders and musicians.   Pictures of the day are here

Everyone agreed that the event seemed to have a natural place in the calendar and we resolved to hold it again the following year.

Beating the Bounds and Fair on the Green 2019 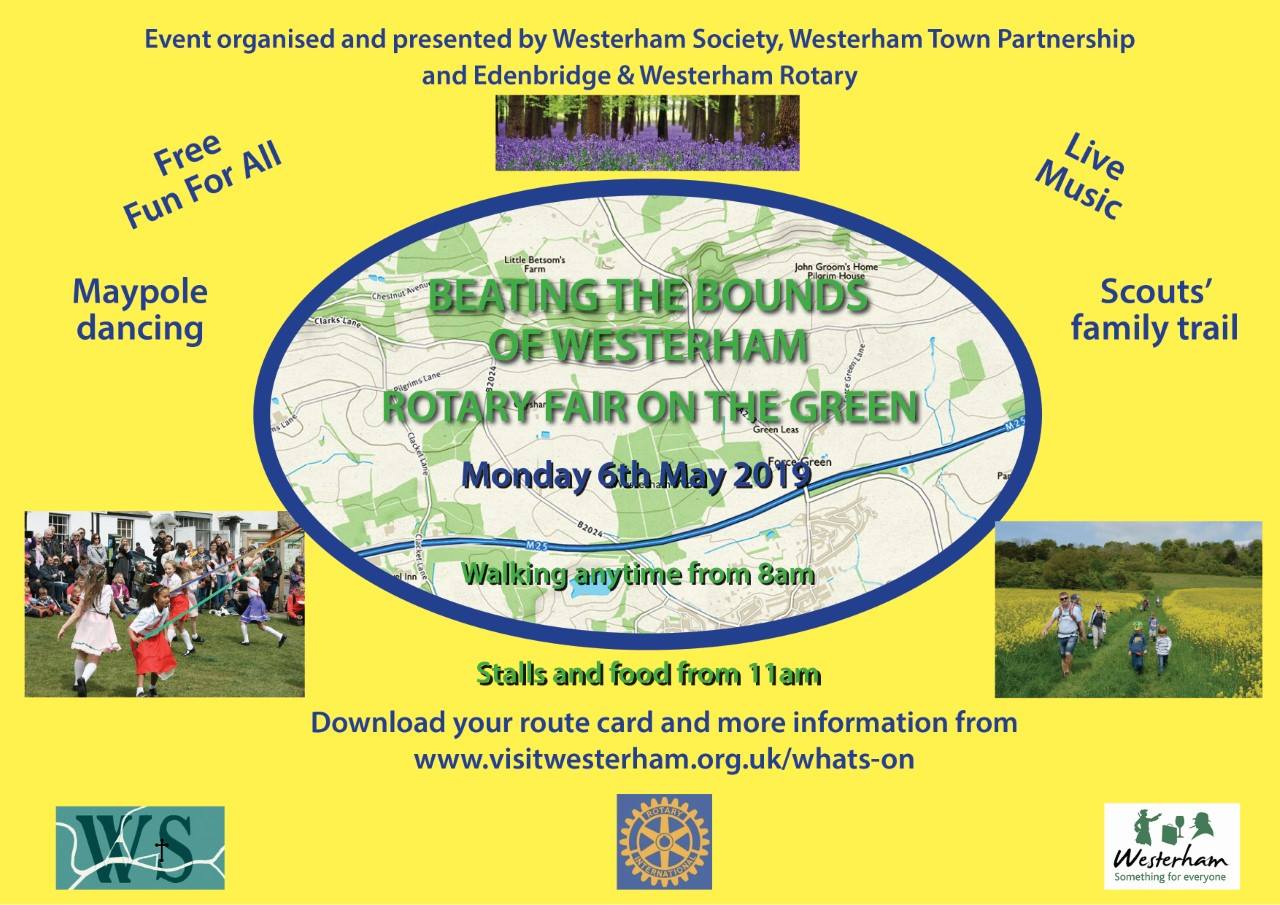 Beating the Bounds dates back to the 1700’s and there is an interesting historical note about its practice in Westerham on here.   The date was usually close to Rogation Sunday.  It was revived by the Westerham Society in the 80’s and again in the 2000’s and combined with a Farmers Market on the Green.   For some years it became a tradition to hold a Rotary Fair two or three weeks later, but this year the Town Partnership, the Westeraham Society and the Westerham and Edenbridge Rotary decided to organise a combined event, which now includes maypole dancing and musicians and charity stalls and food typically organised by the Westerham Scouts and the Sea Cadets.  Some of the walkers started at 8am, but many chose just to walk part of the boundary and everyone tried to arrive back on the Green while there was still food to be had.   Our musicians played on until the very end.

There is a picture album here. 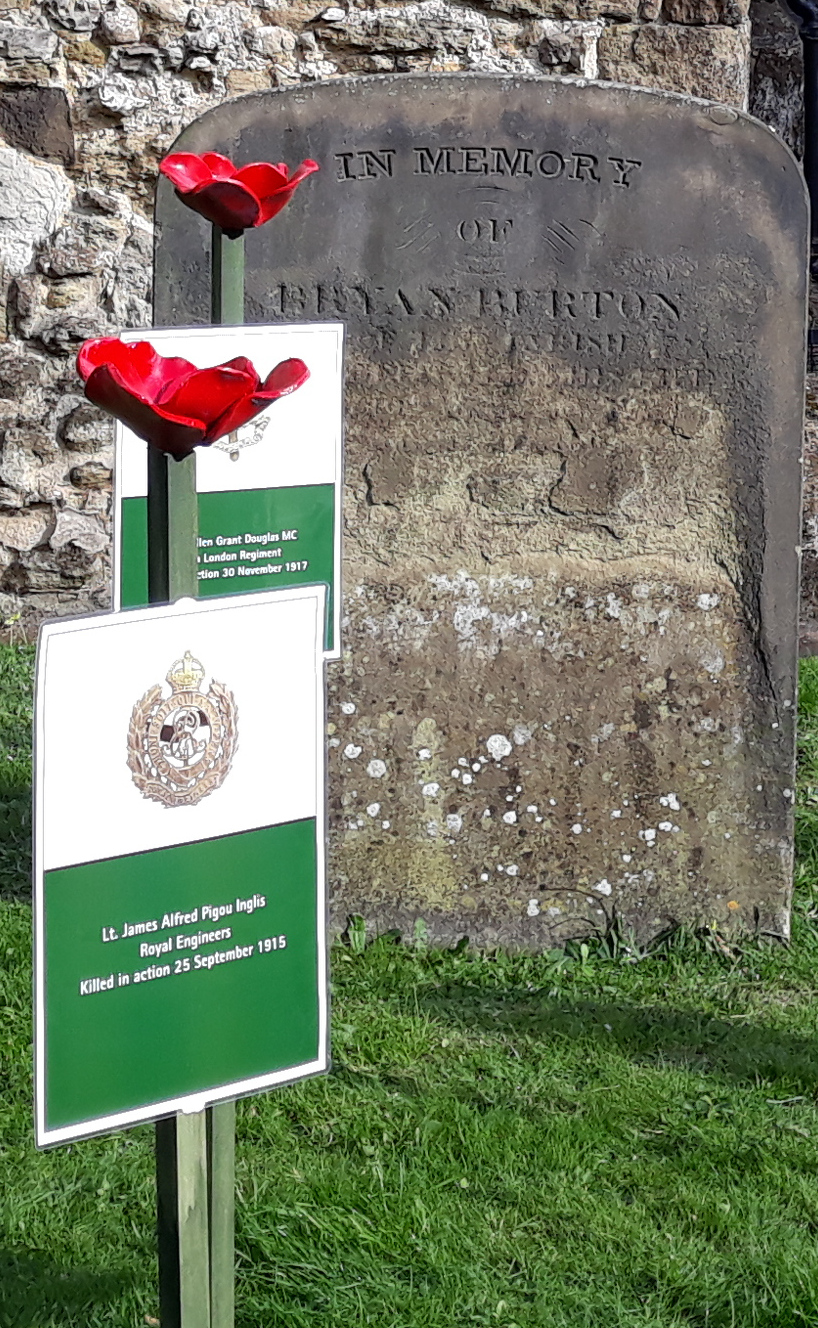 The Town Partnership, with support from Westerham Town Council and the Westerham Society, commissioned Aylesford Pottery to create 50 red ceramic poppies.  Each one was dedicated to a WWI soldier who failed to return home from the Great War.  Churchill School pupils also helped the town to remember by painting and decorating 50 large pebbles which were put on display inside the church. Our  thanks to everyone who helped to mount this tribute.   More  pictures at https://www.flickr.com/photos/westerhamtown/albums/72157702001315151 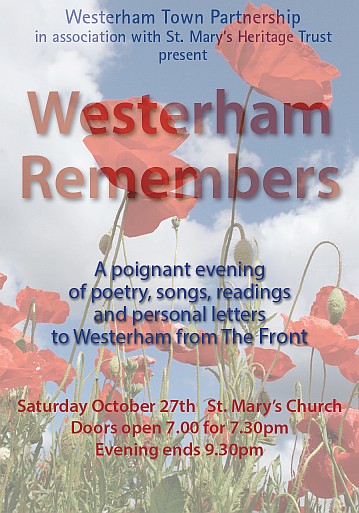 Working with St Mary’s Heritage Trust, we were pleased to be able to organise an evening of remembrance for the 50 men who did not return return to Westerham after the Great War.

Using letters from The Front and pictures and live and recorded music and poems, we endeavoured to remind ourselves of the courage of all those who for “our tomorrow, they gave us their today”.

Read more about the event here

The market ran for seven years from 2010 to 2017, but times moved on and when we lost our fruit and veg stall (to a happy retirement!) we bid farewell to all our other loyal stallholders.   It had  been great fun and was one of the first projects on which the WTP cut its teeth.

The Town Partnership monitored the traffic in town over several years and produced a series of reports which were submitted to the Town Council and to KCC.   “..road widths were designed for horse and cart.  The A25 through Westerham has two sharp bends and two pinch points where the road narrows to 4.8 metres compared to government specification of 7.3 metres for this class of road. Vehicles frequently have to mount the kerb in order to pass.”  Click here to read the final version in July 2016.

The Town Council commissioned a new noticeboard for The Green in 2012, when the old one rotted through. The Town Partnership designed, commissioned and updates the content.  Our thanks to James Turner of Hidden Britain SE for the design and artwork and to Tony York for his masterful carpentry .

The Partnership actively supports the activities and events of others. We support other groups and societies in Westerham, such as the Festival of Christmas Trees run by St Mary’s Heritage Trust to support the church building, the Beating of the Bounds, run by the Westerham Society to raise cash for the hanging baskets, and other events, as they arise. We do this by helping with planning, publicity, erection of safety netting, providing amp and speakers: in short background infrastructure support.

The spill over car park, extending the Darenth Car Park into the field to the east, at times of high demand, has been successfully trialled. Planning permission has been granted, and funding is in place. Work is expected to start imminently, to lay Grassprotecta. We will have up to an extra 70 spaces. WTP will be developing a signage and lighting ‘best practice’ policy. Following our negotiations, new parking charges are confirmed from 1st April 2015 as:

Extension of staying time in the Croydon Rd and Fullers hill to 3 hours (from 2 hours).

Both these will encourage the longer term shopper – or those who want to shop and eat….

Pop & Shop in the on-street central spaces: a half price reduction for the 1st 15 minutes (old price 20p for first  30 mins, new price 10p for first 15 mins then 20p for 15 – 30 mins). After that swift turnover is encouraged, to stop the valuable central spaces being clogged up, with increases after the first 30 minutes.

The Partnership held discussions with BT and KCC and campaigned for votes to support the KCC ‘Make Kent Quicker’ petition. BT announced 95% coverage for Westerham which has now arrived, over a year ahead of schedule, following our campaign. Detailed information on the Superfast Broadband page.

Read the Westerham Town Partnerships’s response to this proposal. Planning has now been granted, and the Town Partnership is actively supporting the joint venture between Squerryes Sparkling Wine and Westerham Brewery. In due course we will be negotiating how to support the marketing of the Farm as a ‘Destination’, and, with the National Trust, the possibility of a Park & Ride to encourage visitor flow to the town centre and to Chartwell.

Westerham Town Partnership has responded to this consultation (Sept 2014). Click here to read the response.

The Town Partnership provided the forum to allow various interested groups, including the Royal British Legion and the Retailers to support Summer 1914 event in July 2014. This weekend event was designed to depict life in Westerham just before the outbreak of War on 4th August. For more information click here. For the photo album, click here. 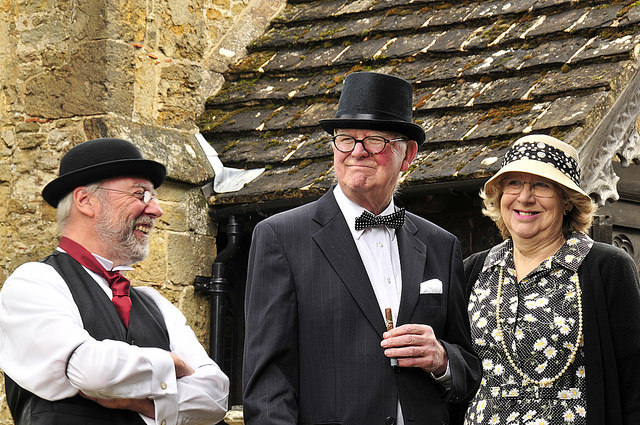 Bringing Westerham’s past characters to life – this was a weekend long event to raise funds to make some of our statues and buildings ‘talk’ using smart phone technology! The weekend delivered a rich assortment of music, a chance to meet and talk with costumed characters, to learn about what it was like to live in Westerham in times past. Visitors enjoyed the activity quiz, exhibitions at the Royal British Legion, family entertainment and much more!

The weekend culminated in ‘The Talk of the Town’ cabaret which included music from local Andrews Sisters tribute act ‘Blue Dominoes’, Music Hall troupe Morven Rae, Poetry and Prose, a little magic from veteran Fergus Anckorn, (the youngest member of the Magic Circle, captured by the Japanese in 1942 and forced to work on the infamous Burma Railroad) and a group from Sir Richard Stilgoe’s Orpheus Choristers for the conclusion of what was a memorable weekend. For more information click here. For the photo album click here.

1½ hours went past in a flash. Residents got together with people from our varied organisations and businesses to eat, drink, talk and generate new energy and ideas about ways to improve our special town. Particular interest emerged around:

Westerham is a place rich in people with skills, expertise and imagination. The Town Partnership actively works to enable each different & diverse offering to compliment the activity of others. We are all volunteers and highly value everyone’s unique contributions, how-ever large, small or medium sized. Involvement is rewarding, free of expectation, and seriously appreciated.

The Partnership intends to get sharper at ensuring we seek everyones’ help in our searches for people with interest and expertise in new projects and ideas; and our next annual meeting will be held in a more accessible venue ensuring the attendance of those with restricted mobility. You can get in touch with us by emailing info@visitwesterham.org.uk.