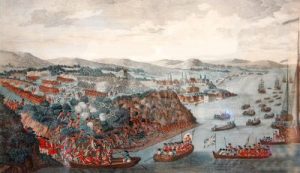 The moon did little to light the inky black river as thousands of men held their breath; a French sentry challenged one of the small boats. “Sshh, or the English will hear us”. Relief, the boats were allowed to pass. At 4.07 am on the 13th September 1759 the British army led by 32 year old Major General James Wolfe began landing at the Anse du Foulon. As dawn broke they scaled the 180 foot cliffs and found their place in history at the Battle of Quebec.

In 1726 Edward and Henrietta Wolfe moved to Westerham. Edward was a Lieutenant Colonel on half pay and moved with his new bride from York to be closer to the seat of military influence in London. They rented the last house on the Maidstone Road; a large old Tudor house that had been greatly altered a century earlier and was then called Spiers.

Soon Henrietta gave birth to the first of two sons, James, and just over a year later young Edward was born. The boys made friends with George Warde whose parents had also moved to Westerham from York and had bought Squerryes Court.

This friendship was to be life-long. At the tender age of fourteen James received news of his first commission as an army officer whilst in the grounds of Squerryes.

James Wolfe was born to be a soldier. At twenty three he was promoted lieutenant colonel of the 20th Regiment of Foot and had been in hand to hand combat at the battles of Dettingen, Falkirk, Culloden, and Lauffeld. After a long spell in Scotland following the ’45 rebellion he was sent as a brigade commander under Lord Amherst with troops to capture Louisbourg – the gateway to the St Lawrence River, the key to controlling North America.

Noticed by William Pitt for his good service at Louisbourg, he was appointed to command the army sent to capture Quebec, the capital of New France – the French colony in North America. In spring 1759 Wolfe led his army of English, Scots and colonial soldiers to lay siege to Quebec. A frustrating summer campaign of inconclusive raiding led many, including Wolfe, to despair that the city would ever fall. However, in early September news reached the young General of a French convoy of small boats due to bring food and suppliers to the besieged city. 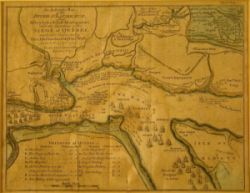 Seizing the opportunity, Wolfe and his officers rallied the men for a daring night time raid. The plan was to get past the city in small boats, row up river to a steep path that led to the Plains of Abraham, the large plateau above the city, and continue the assault from there. Believing the height of the cliffs made them impenetrable the French commanders did not anticipate an attack there and were caught unprepared.

For many years Wolfe had understood what soldiers were capable of and how they could make best use of their weapons. He had trained his own regiment in a new method of volley fire that was devastating to an enemy. Soon all the British army were using this method. When the French finally reached the Plains of Abraham shortly before 10 am this training paid off. The French advanced in three columns firing as they went but British discipline was not broken and the line of troops held fire until the enemy were just forty yards away. With just two rippling volleys the battle was won and the French army fled, leaving the city to surrender on 18th September.

However, victory came at a terrible cost and many men were killed and wounded on both sides. Wolfe was wounded three times and survived only long enough to hear that the French had fled and to utter his final words, “Now, God be praised, I will die in peace”. Montcalm, the French military commander also paid the ultimate price; he was wounded during the battle and died the following day.

PORTRAIT OF WOLFE AT QUEBEC, a reproduction of one by Shaak. Wolfe stands proud, in profile, holding his right arm up. Wolfe’s black arm-band indicates that he was in mourning for his father.

Many buildings and street names in Westerham recall James Wolfe; Spiers was renamed Quebec House in his memory and is now owned by the National Trust and open to the public; an urn in the grounds of Squerryes Court marks the spot where he received news of his first commission; a memorial window and plaque in St Mary’s give thanks for his life; a notice on the George & Dragon pub recalls his last visit to Westerham shortly before he departed for Canada and in 1911 a statue on the town’s green was erected in his memory.

In September 2009, the people of Westerham remembered the events of 250 years ago with a series of celebrations and commemorations and re-enactments at Squerryes Court and Quebec House.

To get the events of the 1750’s in context, if your history is a bit rusty, click here »