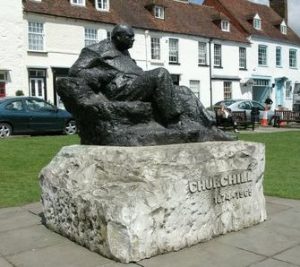 This remarkable man took to the world stage in World War II and led Britain through one of the most dangerous periods in its history. He had seen active service in Sudan, India, Africa and the World War I trenches. He had been a war correspondent and held the highest positions in British politics, including Prime Minister, Home Secretary and Chancellor. He was also a Nobel prize-winning author, an eminent historian and an artist.

Perhaps however, it is as a brilliant orator that Churchill is most universally and fondly remembered. Whether it’s the power behind the “we will fight them on the beaches” speeches; the word craft of addresses like “Never in the field of human conflict was so much owed by so many to so few”; the succinct appeal of “The price of greatness is responsibility”; or the wicked wit of put downs like “A modest man, who has much to be modest about” – his much quoted words seem as popular and incisive today as they ever were.

The Churchills bought Chartwell in 1922 and, apart from the war years (when the distinctive lakes made it an easy target for the Luftwaffe), it was their home till he died in 1965. He adored the place with its beautiful views over the Weald of Kent and would say that “a day away from the house was a day wasted”. In 1946 a group of private individuals bought Chartwell on behalf of a grateful nation and gave it to the National Trust in his memory. Today’s visitors can discover more about Churchill and his influence on world events in the intimate atmosphere of his well preserved home.

The importance of Winston Churchill’s influence and achievements is difficult to over-estimate, and a reading list on the subject would be endless. So instead of a vast bibliography, we set out below some nuggets of Churchillian interest.

He entered Parliament in 1900 at the age of 26 and served almost continuously for 62 years as a Conservative, Liberal or Independent MP. His only break from this occurred when he fell ill during the 1922 election and left ‘without office, without a seat, without a party and without an appendix’. He returned as an Independent in 1924.

Churchill held many offices and innumerable awards, decorations and honours. The most prestigious were the following:

During some of the time that Chartwell was being restored, he rented a house just outside Westerham called ‘Hosey Rigge’, which he would call ‘Cosy Pig’. It is believed that another famous author, Lewis Carroll, once lived here.

During his ‘Wilderness Years’ 1929‒1939, when he was out of government, he continued to keep a finger on the pulse of Europe from Chartwell. His neighbour, Desmond Morton, other government officials and his own ‘spies’ kept him briefed on German rearmament, and he issued numerous warnings of the impending dangers facing the world from Nazi Germany. It was during this time that he wrote his famous ‘A History of the English Speaking Peoples’ and other books.

An accomplished amateur artist, he also used these years to carry on with his great love of painting. Over his lifetime he painted well over 500 works and wrote ‘When I get to heaven, I mean to spend a considerable portion of my first million years in painting and so get to the bottom of the subject.’

Time was also found to implement many household improvements, and he even turned his hand to bricklaying. Apparently he constructed several Chartwell walls and a cottage, and joined the Amalgamated Union of Building Trade Workers.

During the war Chartwell was closed, and when Churchill came to visit, he stayed at the Orchard Cottage.

His daughter, Mary Soames, used to live at Chartwell Farm, next to Chartwell. 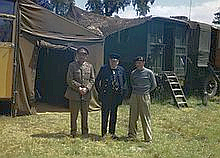 Following Winston’s death, the National Trust was lucky to have Mary Soames, his wife Clementine and Miss Grace Hamlin to supervise the handover of the house, which was left in a way that best reflected this great man’s life. Grace had started as a secretary, but after 30 years she became almost one of the family. She lived on the Green in Westerham and was appointed the first Administrator of Chartwell.

Although it is thought that he lit some 10 cigars a day, he seldom smoked more than a part of each one ‒ and several Westerham residents treasure the butt of a Churchillian cigar!

During his lifetime Churchill wrote 55 books, contributed to some 80 others and had over 700 articles printed in newspapers or magazines.

On his death, and at the express wish of the Queen, he was afforded the rare honour of a State Funeral.

He died on the same date that his father had, 70 years before.

In a 2002 poll he was named The Greatest Briton of All Time!

He was largely brought up by his nanny, Mrs Everest. On the news that she was dying, he returned from Cuba and stayed with her for a week until she passed away. He said, ‘She had been my dearest and most intimate friend during the whole of the twenty years I have lived’.

Originally commissioned into the cavalry, he was an able rider. In India he became an expert polo player. In the Sudan he took part in the last major British cavalry charge, and in 1941 received the honour of being appointed Colonel of the Hussars.

He resigned from the British army in 1899 and took up a commission to act as war correspondence covering the Boer War in South Africa. Following a train ambush, he was imprisoned. His subsequent escape from a Prisoner of War camp and 300-mile trek to freedom made him a minor hero.

He retired from the regular army in 1900 but didn’t retire from the Territorial Reserves until 1924, aged 50.

Following his part in the disastrous Battle of Gallipoli and perhaps intending to repair his beleaguered reputation, he volunteered for the Western Front.

He helped draft the first unemployment legislation – The National Insurance Act of 1911.

As a supporter of eugenics, he participated in the drafting of the Mental Deficiency Act of 1913, although the Act eventually passed rejected his preferred method of sterilisation of the feeble-minded in favour of their confinement in institutions.

He also assisted in passing the Peoples’ Budget, becoming President of the Budget League, an organisation set up in response to the Opposition’s ‘Budget Protest League’. The budget included the introduction of taxes on the wealthy to allow for the creation of new social welfare programmes.

“I have nothing to offer but blood, toil, tears, and sweat.”

At the height of the Battle of Britain, his bracing survey of the situation included the memorable line:


“Never in the field of human conflict was so much owed by so many to so few.”


This engendered the enduring nickname The Few for the RAF fighter pilots who won that battle.

“Let us therefore brace ourselves to our duties, and so bear ourselves, that if the British Empire and its Commonwealth last for a thousand years, men will still say, ‘This was their finest hour’.”

One of Churchill’s most memorable war speeches was delivered on 10 November 1942 at the Lord Mayor’s Luncheon at Mansion House London, in response to the Allied victory at the Second Battle of El Alamein. Churchill stated:

‘Death of a Hero’

Marking the 50th anniversary of the passing of statesman and wartime leader, Sir Winston Churchill, who lived at Chartwell, Westerham. 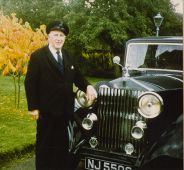 Following Sir Winston’s death on January 24 1965, his chauffeur to and from Chartwell for over forty years Frank ‘Joe’ Jenner appeared in the January 29th Evening Standard in an article titled ‘All of Us’.

“Under that bluff manner, there was the greatest kindness and sympathy for people” said Mr Jenner “I like to remember Sir Winston not for the great things he did for the world and all of us during the war, but for his kindliness and thoughtfulness for ordinary people. I remember particularly some years ago when I was driving him to London and he could see that I wasn’t driving as well as usual. ‘Why these mistakes?’ he asked me. I explained to him that my little boy was seriously ill in Edenbridge Hospital. He at once told me to drop him in London and go straight back to the hospital and stay with the boy. ‘Keep me informed and make sure the little chap has anything he wants.’ When I was able to tell him that the crisis was over, I could see he was genuinely pleased to hear the news. That was typical of Sir Winston.” 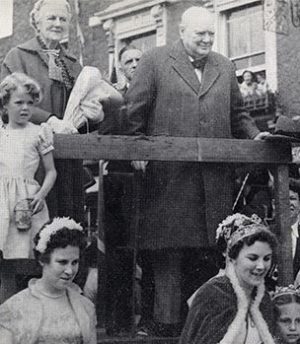 Sir Winston pictured at the 1965 Gala Day with with his wife Clementine and Emma (Soames). Pam Myhill was the Gala Queen. 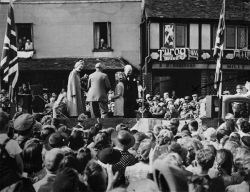 Sir Winston pictured on a lorry at the 1954 Gala Day.

Visit the exhibition at Chartwell commemorating the life and legacy of Sir Winston Churchill. “Death of a Hero” looks at the passing and impact of the country’s greatest statesman and war time leader ahead of the 50th anniversary of Churchill’s death in 2015. See the Press Release…