Westerham’s Gala Weekend in September 2012 was a roaring success: we were blessed with very warm weather and the town was alive with visitors. Visitors and residents alike enjoyed the stalls and the amazing displays by several model boat clubs at the Long Pond Fair, then wandered through town guessing the clues for imaginative TV advert scarecrows. A selection of photos from the weekend can be viewed at Westerham’s photo album.

Participants thoroughly enjoyed the weekend and the feedback from stallholders and volunteers was excellent – a big thank you to everyone involved! The organisers are pleased to announce that they raised a surplus of almost £5000. Two donations have been made to the RNLI, and towards maintenance of the Long Pond. Surplus profits have been made available, for general charitable purposes for the benefit of Westerham residents, to the Barley Charity. Please contact the Town Clerk to apply for a grant. The closing date for applications is 31st January 2013. 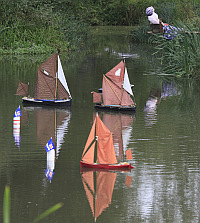 At the west end of town there was a magnificent Model Boat exhibition on The Long Pond, the highlight being the firing of the guns of a Spanish Galleon. The Fair with its children’s entertainment, varied stalls and music from father and son duo Richard and Pete Geiger, who are regulars at the Sunday night open-mic session in the General Wolfe pub, epitomised the English market town. 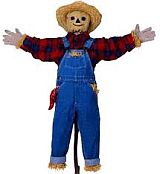 Scarecrow Trail followers were treated to a map and cryptic clues to guess which adverts the scarecrows represented, some were easy and some not so obvious. The winner, drawn out of a hat from the correct answers, was Liz Duval from Bromley who wins £100. Go Compare, made by the Mill Street residents, was voted the best scarecrow.

Quebec House staged a living history camp with re-enactors demonstrating how life would have been in the time of General James Wolfe. Visitor numbers were up by 30% over the previous year, making the National Trust’s free entry weekend a great success.

Going back in time to 1935 Westerham had a Gala Day to celebrate the Silver Jubilee of King George V, who took the throne after the death of Edward V11. King George died shortly after his Jubilee, and Edward V111 was next in line for the throne. At this time Edward was much involved with an American divorcee, Wallis Simpson, and the powers-that-be declared we were not going to have Wallis Simpson as his Queen. Edward made the choice for Mrs Simpson and then abdicated the throne in 1936. His younger brother Albert ‘Bertie’ was forced to step in as King George v1, our Queens father. He died on 6th February 1952 and his daughter Princess Elizabeth became our Queen. On 6th February 2012 she celebrated her Diamond Jubilee, 60 years on the throne.

The Gala Day continued for some time: if you have any photos of this, info@visitwesterham.org.uk would love to hear from you. Whit Monday was always the day every year when we had Gala Day in Westerham. There was a Fancy Dress parade round the town in the morning, picnic and sports events and athletics on the market field in the afternoon. In the evening there was a torchlight procession around the town, and a big bonfire on the market field with a firework display.

This year Westerham is reviving its Gala Weekend on 8th and 9th September. There will be a Model Boat Fair at the Long Pond, Re-enactors in the garden of Quebec House, and a themed Scarecrow Trail linking the two. I, for one, am looking forward to the weekend