In September 1759, General Wolfe commanded British forces at Quebec in Canada and fought the French under the Marquis de Montcalme. Wolfe died of his wounds at the moment of victory and Montcalme died a few days later.

During September 2009, a weekend of commemorations was held at Squerryes Court and Quebec House.

On Sunday morning a service of memorial for both commanders and those who took part in the battle took place on the Green and in St Mary’s.

Read the story of the Wolfe Weekend 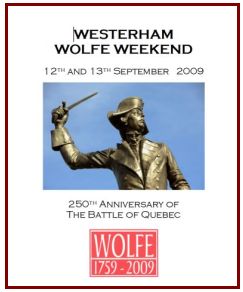 Read more about the life of James Wolfe and to read about Who’s Who in 1759 click here.

To watch a short movie about General Wolfe and Quebec House, made by the BBC for the National Trust during the Wolfe Weekend, click the play button below.