Places of Interest in Westerham

Take our guided walk around Westerham to discover some of its hidden history. Or venture further afield and walk from Crockham Hill to Chartwell.

Here is a sample of the interesting places in and around Westerham and some places you may see on the walk.

Church of St. Mary the Virgin 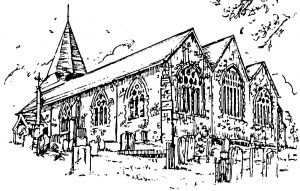 18th century front elevation. Originally built in the 13th century. However there were alterations made to the structure in the 14th, 15th and 19th centuries. There are several 16th century small brasses and various 17th and 18th century memorial tables. 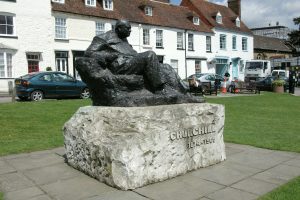 Modern bronze casting of the seated Sir Winston Churchill was sculpured by Oscar Nemon and set on a stone plinth donated by the people of Yugoslavia. 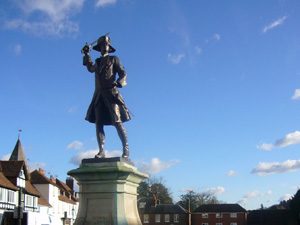 Erected in 1911. Designed by Derwent Wood ARA and standing on an ornamental pedestal of Portland stone. Major-General James Wolfe was born in Westerham on 2nd. January 1727 and died at the Battle of Quebec on 13th. September 1759.

The George and Dragon Inn

As of 2020, currently closed, awaiting refurbishment. 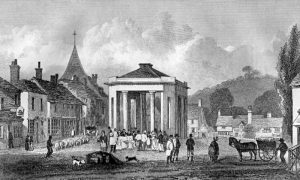 Many old pictures of Westerham show that there used to be a strange structure standing on the Green. There are several prints of this building in existence (this one is thought to be 1830). It was known variously as The Buttery, The Market House, The Summer House, The Pavilion or even The Temple of the Winds. To read lots more about it, click here.

Built in the 16th century or earlier and lived in by William Pitt at one time whilst his home in Keston was being repaired. Numerous additions to the rear including a modern kitchen wing. Now converted to private dwelling.

Built in 1874, as almshouses, this romantic, neo-Tudor style building was bequeathed by Miss Moreton of the Sisters of Clewer.

Grasshopper on the Green

The Grasshopper on the green stands in the centre of Westerham overlooking the green which was for many years, the local market place. The inn derives its name from the heraldic crest of the Greshams, an ancient family who had a country seat at Titsey, 2 miles outside Westerham. One of the most famous members of this family was Thomas Gresham, the Tudor merchant who founded the Royal Exchange and whose brilliant advice to Henry VIII earned him a knighthood. Henry VIII was a frequent visitor to these parts when courting Ann Boleyn who lived at Hever Castle which is nearby to Westerham. shopper to avoid confusion with a local ale house just over the border in Surrey.

For many years the Grasshopper was a coaching station and it was the boarding point for a coach service plied daily between Westerham and Fleet Street. The next point being the Bell at Bromley. From the windows of the restaurant the statue of General Wolfe can be seen, a son of Westerham who died in his hour of victory at Quebec. In 1994 Neale and Anne Sadlier took over the Grasshopper. They re-named the inn Grasshopper on the Green and it is also know as the Little Grasshopper to avoid confusion with a local ale house just over the border in Surrey.

At the foot of Hosey Hill, there was once a building that at various times became the Swan Cinema, a brewery and a munitions factory. To read the history of Quebec Square, just opposite Quebec House, click here.

Foundling Hospitals became famous not only for Thomas Coram’s vision of helping to prevent the abandonment of London’s babies, but also for the Benefit concerts given by the composer Handel [the first London performance of the Messiah drew such crowds that another performance was given.] By 1745 a purpose-built Foundling Hospital was opened at Lambs Conduit Fields, and in 1760 a branch was opened at Wellstreet, just outside Westerham, now better known as the National Trust’s Chartwell. This closed again in 1769, when the lease was withdrawn. During this brief tenure 469 children went through the doors of Wellstreet, with a maximum of 235 Foundlings accommodated at any one time. Read more here

Anyone who walks in the woods on Hosey Hill will come across entrances to what appear to be caves. They are in fact old stone quarries and now the protected home of bats. Much of old Westerham is built of stone from these quarries. Please click here to read the history of the “caves”. 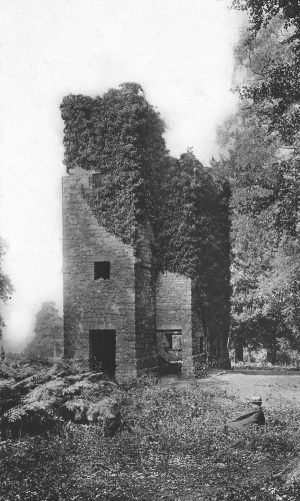 An 18th century Folly Tower, roofless and in ruins. Galletted rubble masonry, 2 storeys and basement. East and west walls have tall, round arched windows on first floor and two round windows below.

A detailed history of The Tower has recently been written by the local historian Robert Combley, who has kindly given permission for his monograph to be available on this website. He mentions that Colbran’s “New Guide to Tunbridge Wells” in 1840 says that the tower was built to obtain an uninterrupted view of St Paul’s London, 21 miles away.

To find out how likely this might have been, please click here to read the history and see plans and historic photographs of this fascinating old building.

With origins dating back to the 13th century, the Grasshopper Inn was altered in the 18th. century and during the 1950s was restored and extended using old materials. A wrought iron door from the Houses of Parliament and the vestry doors from Coventry Cathedral can be found among the panelled walls and beamed ceilings of the Tudor Suite. The Inn’s name is taken from the grasshopper incorporated in the crest of the Gresham family who owned the Manor of Westerham from the time of Henry VIII until the late 17th century.  As of 2020 currently closed awaiting refurbishment.

The church was built in 1842 at the sole expense of Charles Warde of Squerryes Court. It has a tall square battlemented west tower with nave, chancel and south porch of local ashlar stone with perpendicular style features.

Westerham has many famous Houses and Gardens to visit.

Visit the Houses and Gardens page (link) for more information.

Purchased by Winston Churchill in 1922 and his home until his death in 1965, stands beside a quiet lane less that two miles south of Westerham.

Quebec House stands at the eastern entrance to Westerham. A charming 17th century red brick house, it was the boyhood home of General James Wolfe.

Charts Edge Gardens are located on the Kent/Surrey border.

This charming and informal garden was laid out in the late 19th century, with many exotic and rare trees and shrubs from across the world.

Charles Darwin used the estate, including the Great House Meadow and greenhouses surrounding Down House, as an inspiration for his work and a test bed for his ideas.

Set in the rural Weald of Kent surrounded by picturesque countryside and ancient parkland, Penshurst Place and Gardens has changed little over the centuries.

Chiddingstone Castle, a unique and unspoilt castle in Kent set in 35 acres of grounds including a lake open to fishermen, a rose garden, and magnificent woodland.

Set at the heart of the only remaining medieval deer park in Kent, Knole has fascinating links with kings, queens and nobility.

Dating from 1320, Ightham Mote is a romantic moated manor house.

About 1 mile to the east of Westerham via French Street

Visit Toys Hill on the highest point on the Greensand Ridge in Kent and view the four counties of Kent, East Sussex, West Sussex and Surrey.

Have a great family day out in the most imaginative garden to visit in Kent.

Set in the heart of the Garden of England and surrounding a 17th century house.

Titsey is one of the largest surviving historic estates in Surrey. It dates back to the mid-sixteenth century, though the first impression now is of a comfortable early-nineteenth century house in a picturesque park.

Lullingstone Castle is one of the oldest family Estates in the country and dates back to the Domesday. It has been in the Hart Dyke family for 20 generations.

Standen is The National Trust’s flagship Arts and Crafts country house. Famous for its William Morris wallpapers, textiles and contemporary fittings, the house was built in the 1890s by architect Philip Webb.