A Walk around the centre of Westerham 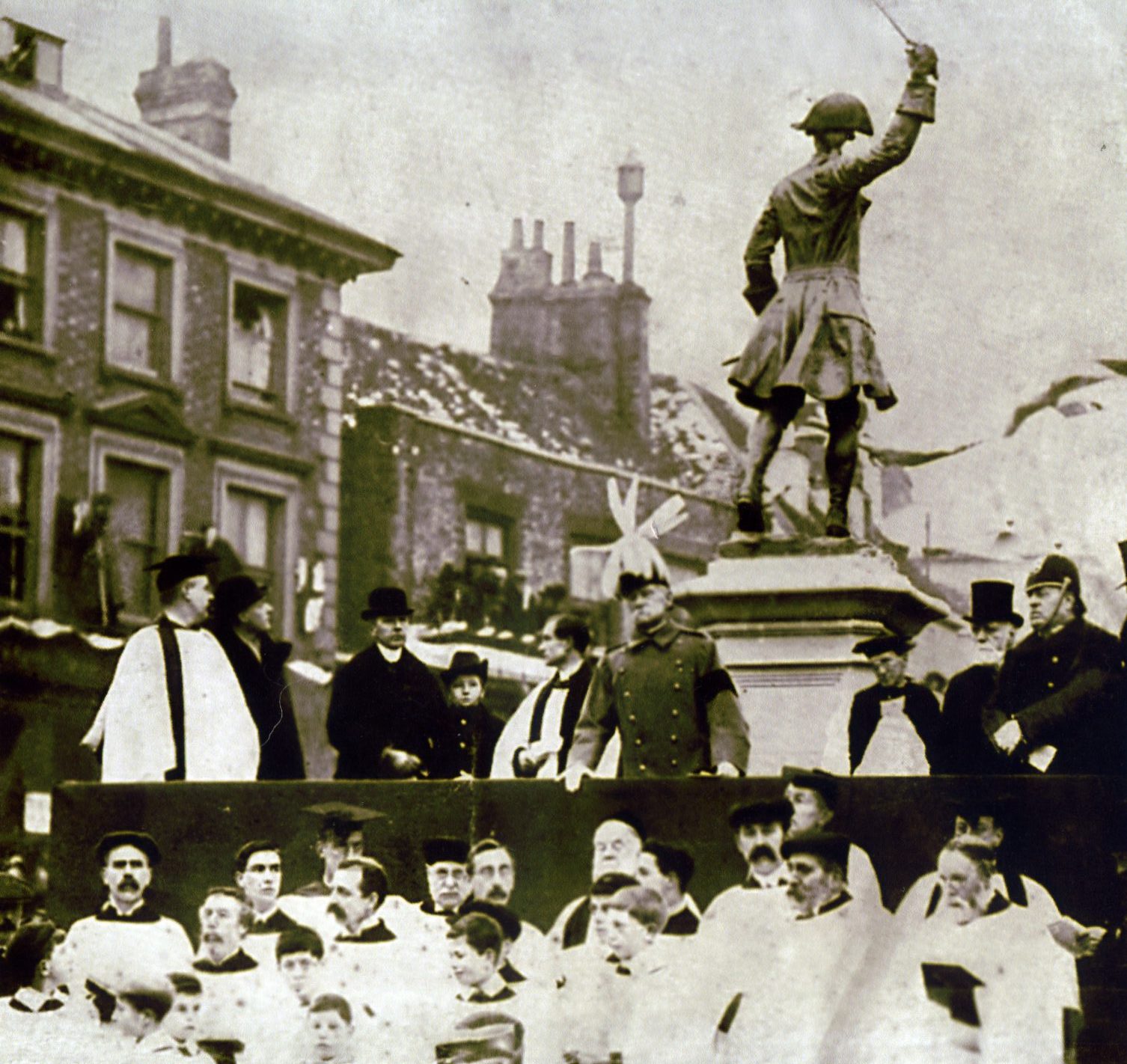 Begin your walk at the statue of General Wolfe (erected in 1911) which is located at the west end of The Green. Carry on towards the church, past the 16th century Grasshopper Inn and a row of shops and houses whose origins pre-date their facades and you will reach the statue of Sir Winston Churchill. Note the Kentish ironstone setts on either side of the paving stones, also to be found in the churchyard.

The parish church of St Mary’s is built of Kentish ragstone. The tower dates from the 12th century, the walls from the 13th and 14th centuries. Take in the impressive view eastwards from the War Memorial over rooftops to woods and fields beyond, then turn back to take the path to the left of the church, past the tower and the John Frith room, named after a Protestant martyr who died at the stake (1533) aged 30. He was born in the house on your left when it was an inn and his father the innkeeper.

Over the wall just beyond the church there are lovely views of the North Downs. Take the path nearest the church where on the left, beyond the seat, is the grave tablet of Noel Streatfeild, author of ‘Ballet Shoes’. Peter Nissen (of Nissen huts fame) is also buried in the churchyard.

The path curves round to join the one from the War Memorial so then turn left down to Quebec Avenue, cross the road and take the footpath to the car park, over the River Darent. A notice board on the left lists some local attractions. Continue along the path to the A25 and eastern boundary of the town.

Turn right along the A25, back towards the town, past Westerham Place, (once Darent Towers) home of Luke Hansard’s family (of parliamentary fame). Next to it is Quebec House, built in the 17th century and formerly known as Spiers. This was the boyhood home of General Wolfe, who died leading an army to capture Quebec for the British in 1759.

Across Quebec Square, behind the houses and off Hosey Hill, once stood a cornmill and the White Swan brewery; sadly, all that remains is a chimney stack and the name ‘Mill Street’. Beyond is 18th century Grosvenor House. Note the distinctive wall at the front of the property.

Leaving the Square, past another former inn, is Darenth, a 15th century Wealden House, so named for the stream that flows under the road nearby. An old bread oven projects from its inner corner. On the opposite side of Vicarage Hill, many old houses can be found, including Red Cow House (c.1450), Copthill, another hall house and the Old Vicarage. On your right by the narrow footpath to the churchyard, is Coltherst’s (1575) one of the town’s three almshouses.

Walk up to The Green (in the north east-corner there is the Town Council’s Jubilee Noticeboard, with a wealth of information) until you are opposite a house known as the Pheasantry (now housing the Comodor Restaurant) with its distinctive weather vane. Cross the road when you reach the bus stop and walk back to Water Lane where residents once drew their supplies from the mill leat. Notice the window of the Owl House next to it with the glass engraving ‘reflecting’ The Green behind you and depicting the faces of the children who once lived there. /> Continue up the hill to the Market Square, past the Kings Arms and turn left to Russell House, the Parish Council office and surgery, to see the Domesday Mosaic by local artist Kenneth Budd. Sponsored by Rotary in 1980, it illustrates the entry for ‘Oistreham’ in the Domesday Book.

As you venture west, the Market Square becomes the High Street, where more shops can be found before turning left into Lodge Lane with its many picturesque old houses. Before the gates of Squerryes Lodge, turn right onto a footpath through Back Meadow, past Redwoods into Mill Lane. Beyond the round pond, there are stones marking the site of another corn mill fed by springs which flow into the Darent.

Turn back along Mill Lane to the main road, past the Royal British Legion to Verralls Corner; on the left is Old Forge, once a smithy.-  Cross the road here (with care!) and walk on past the former Black Eagle Brewery, once famous for its Westerham Ales. Note the Victorian postbox on its wall.

Opposite is the Long Pond, restored as the town’s Millennium project. The weatherboarded General Wolfe Inn shows another local building style. Beyond is Moretons, different again, as is Pitts Cottage, where William Pitt the Younger stayed while his home in Keston was repaired.

At Wolfelands, looking up Goodley Stock the lodge gates of Squerryes Court are visible. The impressive William & Mary house, home of the Warde family since 1731 looks over the western boundaries of the town.

Retrace your steps to Verralls Corner, passing houses of many different periods. Just before Wells Place are the Old Laundry Cottages (14th-18th centuries). On the corner of Croydon Road is the 17th century Old Manor House. Beyond lies an oast which is all that remains of Delagarde Farm. Take the zebra crossing to Market Square and at the George & Dragon, another coaching inn, a plaque commemorates James Wolfe’s last stay in December 1758.

Beating the Bounds of Westerham (Section of walks encircling Westerham)

This takes place every year: see What’s On.